Eminem’s real name is Marshall Bruce II. He is a rapper, songwriter, record producer, and actor. Currently, he is one of the big names in the world of rap. Most importantly, Eminem is known for his popular songs ‘Love the Way you lie’, ‘Stan’ and ‘Without Me’. Apart from this, he is on the limelight for a clearly strained relationship with his mom Debbie Mathers Briggs.

In this article, we’ll look into Eminem’s family tree. Get to know about everyone related to Eminem. 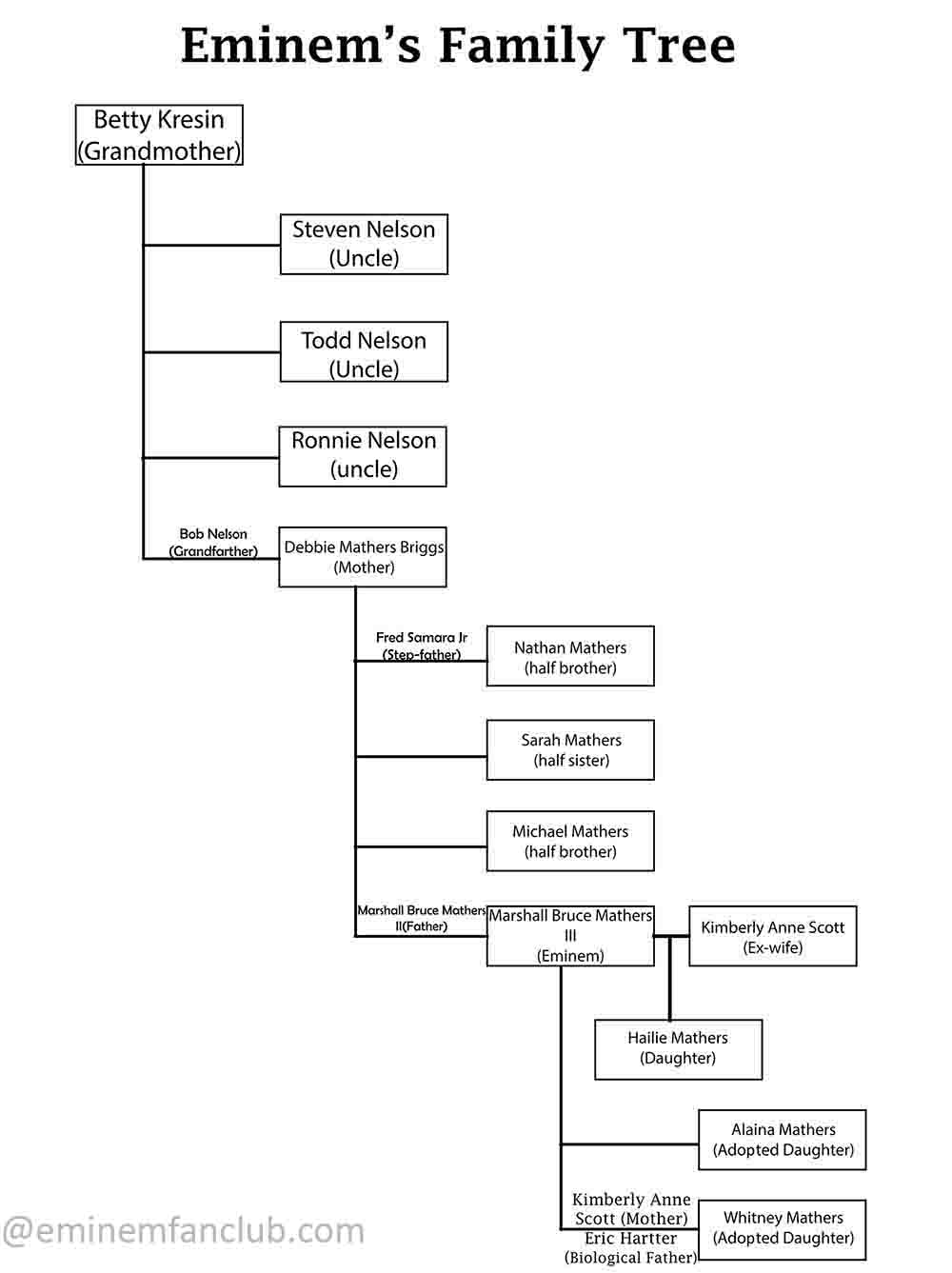 Betty Kresin is Eminem’s grandmother from the mother’s side. She has 6 kids from 3 marriages. Firstly, Betty Kresin was married to Bob Nelson. She was only 14 years old at the time. Betty Kresin had 3 kids in this marriage. She parted ways with Bob Nelson after a while. This is because he was verbally abusive.

Later on, Eminem’s grandmother got married to Ron Gilpin. She had 2 kids with him. One of the kids is Betty Schmitt. Betty Kresin broke up with Ron Gilpin in 1968. This was because of his alcohol addiction and persistent violence.

Clearly, Eminem’s grandmother did not give up on trying marriage. She got married a third time. From the third marriage, she had one kid; Ronnie Polkingharn. Unfortunately, Ronnie committed suicide in 1991.

Currently, Betty Kresin is a teacher of English and German. Also, she is a music journalist.

Debbie Mathers Briggs is Eminem’s mother. She was born on January 6, 1955, to Bob Nelson and Betty Kresin.

Debbie Mathers got married to Eminem’s father when she was only 15. The marriage did not last long. Undoubtedly, the two parted ways when Eminem was only 6 months old. She never received any form of child support from Eminem’s father after the divorce.

As a result of the trauma from divorce, Debbie Mathers ended up being a drug addict. She regrets her former addiction up to date. It caused a strained relationship between her and Eminem.

Debbie Mathers has 2 kids, Eminem and Nathan Kane Samara. At the moment, she is married to Briggs.

Marshall Bruce Mathers II is Eminem’s dad. He was never involved in Eminem’s life. Eminem tried his best to connect with Marshall Bruce. He used to send letters. The letters always came back unanswered. Eminem grew up as a bitter kid, with severe hatred for his dad and mother. He always blamed his mother for separating him from his dad.

When Eminem rose to fame, Marshall Bruce tried apologizing to Eminem. However, it did not work up. Eminem was too bitter to take up an apology.

Marshall Bruce Mathers II died at the age of 67.

Steven Nelson is Eminem’s uncle from the mother’s side. He was very close to Eminem. In fact, he was like a father figure to Eminem. Eminem used to call him dad. Sadly, Steven Nelson committed suicide by shooting himself in the head. This was as a result of deep sorrow caused by his brother’s death. Eminem was deeply affected by Steven Nelson’s death.

Todd Nelson is Eminem’s uncle. He spent 8 years behind bars for murdering his in-law. The murdered in law was his wife’s brother. Todd murdered him for attacking him after divorcing Janice. Todd Nelson was a lawyer. He was an advocate for the end of Asbestos use in prisons.

Just like his brother (Steven Nelson), Todd committed suicide. Prior to his death, he used to make a living by selling old drawings of Eminem.

Ronnie Nelson is Eminem’s uncle. He is Debbie Mathers’ half brother. He is the only kid from Betty Kresin’s third marriage.

Sadly, Ronnie Nelson committed suicide. This was a result of a mysterious breakup with his girlfriend. At the time of his death, he was 19 years old. He is remembered in Eminem’s song ‘Stan’. Also, Eminem bears a tattoo of his name.

Nathan Mathers is Eminem’s maternal half brother. He was born in February 1986. He is the result of the relationship between Debbie Mathers and Fred Samara Jr. Nathan is very close to his brother Eminem. Probably, it’s because the two share a mutual love for music.

Nathan is a budding rap star. Nathan and his brother Eminem live together. In addition, they do music tours together. Apart from this, he features in Eminem’s music video ‘Without You’.

Sarah Mathers is Eminem’s paternal half-sister. She was born in 1998. Sarah Mathers is from Marshall Bruce Mathers II’s second marriage. Sarah Mathers never knew about Eminem’s existence until she was 7 years old. She tried to reach out to him. However, her efforts did not bear fruit.

At the moment, Sarah Mathers is a waitress in California.

Hailie Mathers is Eminem’s daughter with Kimberly Ann Scott. She was born on 25th December 1995. Hailie is very close to her father Eminem. They are the best of friends. In fact, Eminem has mentioned her in 22 of his songs.

Hailie is an Instagram celebrity. She has over 1 million followers. On Instagram, she is a beauty and fitness influencer.

As young as she is, she’s already fallen in love. She is dating Evan McClintock.

Alaina is Eminem’s adopted daughter. She is the daughter of Kim’s late sister. Kim and Eminem adopted her after the death of her mother. At the moment, she is 26 years old.

Whitney Mathers is Kim Scott’s daughter from a previous relationship. She had her while cheating on Eminem. However, Eminem accepted full responsibility. He even gave her his last name.